Day 860, December 11, Tuesday was a total Cardiff day. Considering how many places we visited during our housesitting adventure, it was finally great to be in Cardiff again. Cardiff was our base. Well, my base because Cardiff was the very reason I left home for 3 months in the first place. I became a Creative Writing student (postgraduate) at the Cardiff Metropolitan University. But our house sits were mostly outside Cardiff, even outside Wales! We had to pick certain dates and thus even agreed sits that were a bit away. As I had workshops only on Monday and Wednesday evenings (5-8 pm, ugh), I was willing to travel. So, I travelled from Weston-super-Mare, Swansea, and even Oxford. 2 hours on a train or bus? One way. Oh, well, if I have to, I will.

A day in Cardiff without any obligations felt like a breeze. We had just finished a sit in Oxford and our very last sit before going home was going to be fairly nearby, in Caerphilly. But that Tuesday was completely our own. We woke up in my new favourite guesthouse, Austins, yet another one by the riverside. Very comfortable bed and large bathroom. No kitchen, just a kitchenette, but we could survive this for a few days. We both went for our runs. Came back. Showered. And then went for lunch in Tortilla. Afterwards, we spent a few hours at the Cardiff Central Library. It is a fairly new and modern building right in the city centre. You might even come across with it while wandering on one of the big pedestrian streets. The library is the glass building behind the Alliance sculpture, which is basically a gigantic hoop paired up with an arrow. An interesting fact about the sculpture: the hoop is full of phosphorescent liquid and it rises and falls the same way as the Bristol Channel tides. During my housesitting adventure, I lived on both sides of the channel (Penarth and Weston-super-Mare) and the tides are massive!

I have been to the library once before and I do prefer it to do some work. There’s Wi-Fi and there are power outlets as well to plug in the computer. I usually go to the top floor. Because… did I mention it is a glass building? Well, there’s the view! The street network in the centre of Cardiff makes much more sense from up there, although, honestly, I am still pretty much confused about how the city actually works.

This is the day when I finally started designing my Christmas recipe book that I really wanted to get published online much earlier. This book was supposed to bring in the much-needed money for our house. I designed the cover and quite a few pages. The beginning was the toughest because I didn’t have a clear idea of how it should look like. Once I had started, it did seem very fascinating!

Well, I spent quite a few hours getting closer to that publishing bit! See point 1.

A hard training, not perfect. The illness was still lingering inside my body. But I still did it. On one of my last runs around Cardiff Bay, I finally discovered that I had been doing the dedicated 10K trail slightly wrong. Ooops! But better late than never, right? 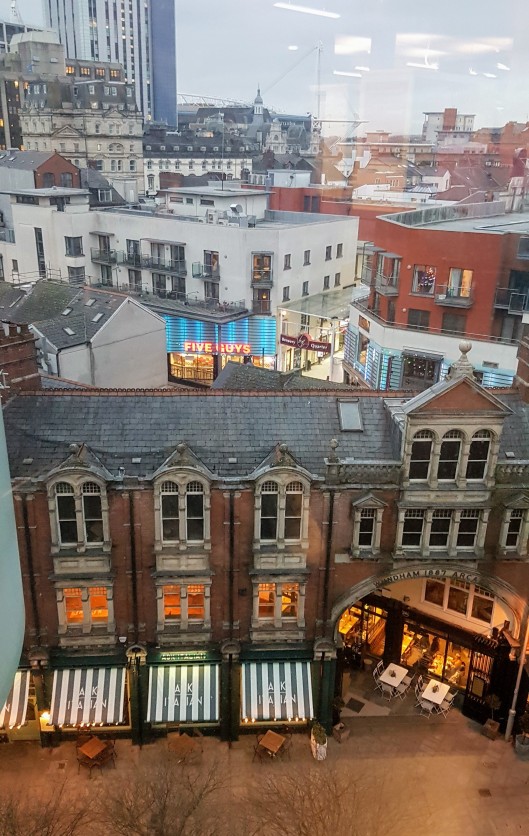 View from the library.