On day 895, Tuesday, November 6, I woke up in an apartment. Not home, unfortunately, I would love to be back home after having been away a bit longer than 8 weeks. It was our house sit apartment. Out of all the places where we have stayed or will stay, this is probably the smallest. It’s not a house. We scrubbed it clean and it feels more homely now but I do prefer houses to be honest. In houses, we’ve never had neighbours spying on us from their peephole. I hate this lack of privacy. The lady we are house sitting for actually told us last time we were here (1 week in October, 2 more in November, the only place where we are staying twice) that the neigbour looks out of the peephole a lot and takes notice of other people moving around. She said it in a tone which indicated as if it was something utterly normal. I don’t think so. I believe that it is completely my business where and when I go. But that’s what you could get with apartments and common hallways (this one smells of smoking, although there are signs saying that it is strictly forbidden). At least, the apartment only has one door for entrance and we shut it very tightly. I feel safe.

Houses have gardens and fences, built for privacy. I love getting out of the door without anyone watching me go. With dogs, it is easier to have a back garden at your door step. In the apartment, we have to run down the stairs early in the morning and late at night. It is not the distance. The distance is probably the same that we had to travel in that huge 6-bedroom house, where we were previously, coming from our bedroom through the long upstairs hallway, down the stairs, through the utility room and kitchen to let the dogs out from the conservatory… No, not the distance, but the eyes that spy on us behind one certain closed door. Each time, I go down, I feel the urge to hold a hand in front of my face. I don’t know whether she is peeping or not but I cannot think of anything else when passing the door.

Big houses do bring out some irrational fears. So many doors downstairs. So many places where a stranger with bad intentions could enter. Did you lock the gate? Did you lock this door, that door, the third door? Moving around the house is slightly scary once the darkness arrives. Is there someone behind the window? I had these fears already in Penarth when I was alone. They came hunting me in Cardiff for those few days that I spent with Mitzi, the bichon frise. I had them still when we stayed in Shrewsbury together. It didn’t help that the dogs would start barking even when there was nothing wrong, when they were bored and wanted us to come and stay with them because they were not allowed in the lounge or any other room with a carpet on the floor.

Would house fears come haunting if it was our own house? How can you feel safe?

Cleaned the apartment and possibly realised that we are rather clean people, although our home can get messy during busy periods as well. However, it doesn’t get that bad… The feeling of disgust overwhelms us before it gets awful and we clean up. Being tidy is a nice habit to take with you when becoming a house owner, I guess.

Read some classical pieces for next day’s workshop. Chekhov’s The Lady with the Dog, a romantic story with some passionate love but told in an oddly dry manner. For some reason, this is the way I see it. An enjoyable story, certainly. The other story we had to read was Kafka’s Metamorphosis, which I listened to as an audio book. A salesman wakes up one morning and realises he has turned into a giant beetle. He can no longer provide for his parents and sister. And what does his family do? How do you live with a giant creature who doesn’t speak human language anymore? Does it understand you? Is it really your family member? Do you love it, hate it? Not a very happy story, but somehow amusing. The way how the beetle tries moving around and copes with his new body. Hilarious! I know, I know, should find a deeper meaning in this. Maybe next time I read it? Who said that you couldn’t read a story in different ways?

So, I familiarised myself with some classic works. In one way or another, they will certainly have an influence on my work at some point in the future.

15 km aerobic threshold run. The hard one. Also, the enjoyable one if all goes well. It did go well. My anaerobic speed is non-existent, but I can run pretty fast on the aerobic threshold or at lower speeds. 4.46 min/km for this 15 km workout. Almost like my best days (current record for such a long run should be 4.42). 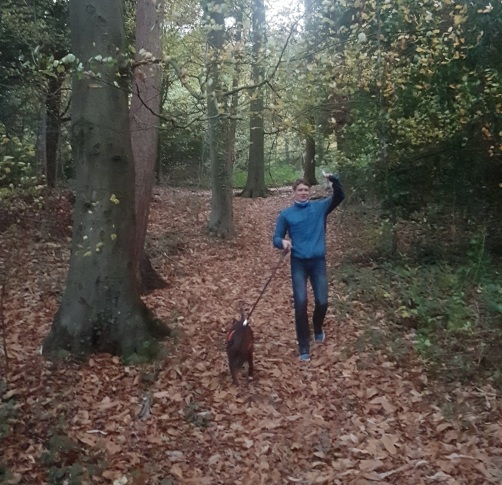 Took the dog into the woods for a walk. Boy, was he tired afterwards!