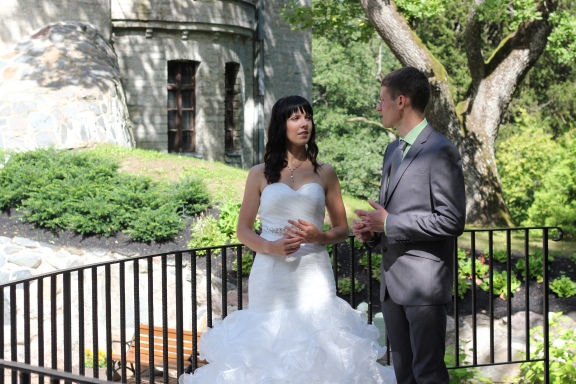 Day 995, 29 July means that it is time to plunge straight into something that could seem like a heavy topic for some people: marriage. Why? Simply because this date is our wedding anniversary! I will not give a long lecture about love, marriage, etc. Let’s just see how it happened for us.

August 2013. We met for the first time through a mutual friend, although we had probably already BEEN in the same places, i.e. the same running events. We had run the same trails and at one event someone had even mentioned his name, pointing to him as a “fast runner”. At our first meeting, we had an awkward 10 minutes alone at an outdoor cinema as our friend tried to find some wine and I remember telling him about my cat who had just fallen down the window, had her hip and paw completely broken and was due for a second opinion doctor’s appointment. No way, I was going to let the doctors cut her paw off! She did recover and lives with us with all 4 paws attached. Believe me, I have had a cat with 3 paws before due to an accident and it was fine, but I am so happy I spent the money to give Mjauki the best treatment.

Autumn-winter 2013. Some random meetings while me, him, my friend and our mutual friend tried to start something like a poetry writing club. In a creative writing exercise (which I invented), I managed to write a poem about him.

New Year’s Eve 2013/2014. Spent it together at our mutual friend’s place. As I remembered my grandmother saying that it was lucky to be first told “happy new year!” by a person who was of the opposite sex, we ended up hugging each other. The night, however, was weird and I stumbled upon someone from my high school days. That someone was drunk and I didn’t like him that way anymore, so I escaped.

March 2014. I was wandering around in Asia, getting in trouble and finding myself or whatever. I wrote to him as a physiotherapist and asked for advice about my sore hamstrings, hoping he would maybe invite me to a massage/therapy. He didn’t get it. He advised me to roll my hamstrings with a big bottle.

July, August 2014. I met one of his sisters during a 10-day running camp and another one (his twin) a few weeks later. They had a talk with me in the sauna, asking whether I liked him.

October 2014. Invited him and his twin sister whom I had befriended to my housewarming party. He forgot his gloves behind and when I told him about those admitted that he liked him. He came for dinner and after that, we started spending much time together.

December 2014. He moved in as there was no point having two separate places.

January 2015. We started our own company and started spending time together also during the day, not only evenings and weekends.

July 2015. After having moved to a new place, we went to buy some stuff from Helsinki’s Ikea and while waiting for the Ikea bus, discussed whether we should get married. The result was that we decided to get engaged. Romantic, right?

There have never been big fireworks, fights, breaking the dishes, we have always got along well. All the steps on the way simply seemed so natural for us. Moving in, starting a business, getting married. It happened fast but we do not regret it. When something feels right, it might as well be.

My husband asked his father about the trimmer types as we have lots of grass-cutting to do. As the conclusion was that we might be better off renting one, I searched for renting options and found a few. We also thought of asking from our local Facebook group.

For the second day in a row, I carried my special notebook with me to the stadium but didn’t even take it out.

Long run planned. And I did it! 24 km, 2 hours, heat-heat-heat. I didn’t go too far, but put a water bottle near our house and used it as my drinking station. At first, I managed to run 8 km without feeling very thirsty, then 5.7, then I already wanted to drink more frequently. After the first 14 km, I had to increase the pace and run at my aerobic threshold. Phew! The going got tough, I used an extra “water station” and cooled myself off by splashing water from our local water reservoir onto my face and even drank out, not caring whether I got some parasites from there or not. Overall, a long but good training. Slept half an hour, drank tons of water and then headed to the stadium again as it was the 2nd day of Estonian Trac & Field Championships. In such a small country, we know almost everyone (at least when it comes to the runners) and those people you might usually see on TV and who go to the Olympic Games, say hello to us (or my husband, he has been in the running world for a long time) and actually come to my husband for a physiotherapy session. So, the entire event was like a big celebration and meeting of friends, the best way to spend our wedding anniversary. It ended with a dinner with our running club. My head ached a bit because of the heat, but all fine. And… when the men ran 5000m, the heat (even at 6pm!) became quite unbearable. The stadium thermometer reached 36 degrees and then simply stopped functioning…

The stadium and us. Wearing the same orange dress I wore to our wedding party. Yes, for the fancy part and the photo session, I had a big white dress, but changed into the orange one because the white one was quite difficult to handle when it came to going to the toilet, etc.!